This time a simple but useful maths idea. Basically it is the motivation for my categorize code, which I will give in the next couple of posts.

Simply enough, let's semi-formally define them:
Here is a simple visualization of that: 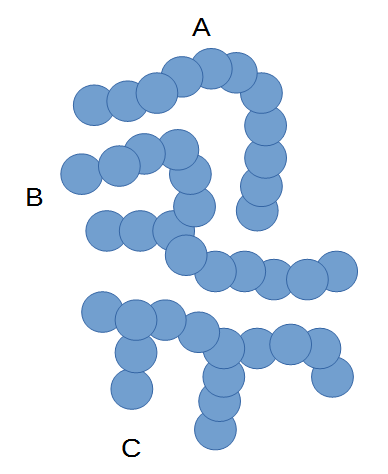 - Your appearance, first as a baby, then up through adulthood, and then old age forms a linear bridging set.

- Your weekly shopping basket is usually a linear bridging set (if you are a consistent shopper). Eg, from 5 years ago, week by week, till now.

- If we have a metric that can measure the similarity in DNA (some version of simm perhaps), then each species form distinct bridging sets. ie, all members of a species are quite similar in their DNA, and dissimilar to other species.

- A person's face from all different angles/perspectives form a bridging set. Ditto a banana, or a pen or a stapler, or a tiger, or an elephant, any object really.

- The collection of atoms that make up say a dog, form a general bridging set.

- Scenes in a movie/tv show, even as characters move around a bit, is a general bridging set.

Anyway, that is all simple enough!

The point? It motivates our categorize code. Categorize basically converts a set of elements into distinct/disjoint bridging sets. The python for that up next.

Some notes:
The value of t has a strong influence on the result.
Set it too tight and your categories splinter into smaller ones.
Set it too loose, and everything ends up in the same category.

The addition of a single new element can sometimes merge two or more categories into one, if it is in a key location.
And the other way too. The removal of a key element can fracture a category into two or more pieces (eg, if you remove the middle of the bridge, it is no longer a single bridging set).

Update: unlike support-vector-machines, bridging sets/categorize do not require the distinct/disjoint sets to be separable by a hyper-plane. eg, in an extreme example you could have a bulls-eye, a circle with a dot in the middle, and the code would classify them as two different bridging sets.